I just got back from a trip to Iceland and London, England.

Iceland was spectacular.  One of the most beautiful and majestic places I’ve seen in my life.  The vistas and landscapes were eye candy.

Pictures, no matter how great, do not do a place like Iceland justice visually.  You have to see it in person.  I’ve been looking at pictures for decades, and nothing prepared me for the visual lightning bolt that is Iceland.

Iceland has been on my bucket list for nearly twenty years, ever since I discovered the band Sigur Ros.  And finally being able to see it in person was a great opportunity.

As I was already half way to Europe, I decided to spend a week in London before heading back home at the end.  I also had a great time in London, too.

Here’s a recap from my notes:

My first full day in Reykjavik, the capital city of Iceland.  I arrived yesterday and the weather was horrific – fierce rain and rough winds.   I was like, f#ck, if it’s like this every day, this is going to suck!?  It was brutal.

The locals said they hadn’t seen the sun in months (yikes).

But as soon as I got driving towards the city, the sun broke through and it was good weather.  An amazing stroke of luck, and good weather held up for the rest of the trip.

I got my rental car and headed downtown Reykjavik, the capital city of Iceland.  It was like 7am in the morning.

The staff at Foss Hotel recommended I check out the local pool, Laugaradalslaug, which turned out to be the best recommendation of my entire trip.

It was fantastic – geothermal hot pools of varying degrees, geothermal steam rooms.  I met some college kids from New York who were hitchhiking around Iceland, they had some hilarious stories which I can’t restate here.  I liked the pool so much, I went back a second time the next day.  There is nothing else like it.

In Reykjavik, which is a mid-size metropolis like Portland, I visited some of the famous  sights: Viking helmet church, local museums, Sun Voyager monument and the famous hot dog stand, Bæjarins Beztu Pylsur. It’s a modern town, very much on the upswing – modern construction everywhere.  No homeless people.  Super clean.  Locals are nice, but reserved in that Scandinavian stoic kind of way. 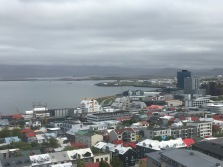 One unexpected highlight was a The Einar Jónsson Museum, who was an artist & sculptor who lived in Iceland after the turn of the century.  His sculpture work is striking and kick ass. 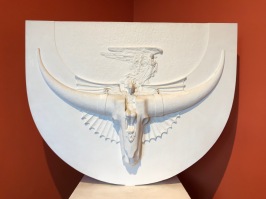 One thing I noticed very quickly: Iceland is very expensive – everything costs about twice as much in the US, although if you go to the discount supermarket, Bonus, prices are much more reasonable.

After two days, I finally made it out of Reykjavik and into the Golden Circle.  The scenery is truly beautiful, natural wonders are everywhere. Gullfoss waterfall was amazing.  I appreciated how there is no advertising or corporate propaganda like you see in the United States.  No billboards to distract the eye. 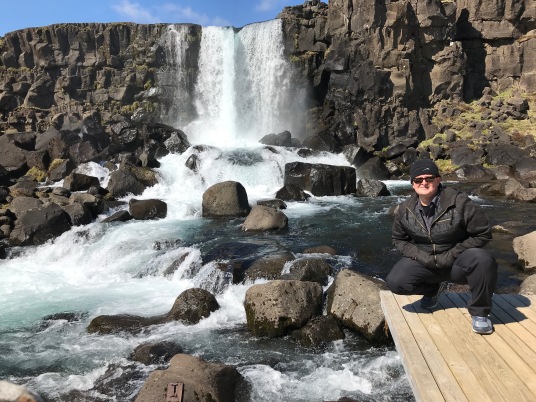 I mostly ate fast food, which is still expensive (Subway sandwich is $10 dollars) or pre-packaged sandwiches. As eating while traveling is one of my favorite things to do, this part of Iceland was a negative.  I heard government taxes the sh#t on all imports with a VAT tax.

Having said that, there is no shortage of tourists.  All the tourist sites are packed, but they were all free – no admission fees anywhere at the parks. which helps offset the costs of everything else.

I stayed at a B&B on the third night in Selfross called Bitra.  For $75 bucks it was the best deal yet in traveling around this expensive place.  Small room, bare bones, but free breakfast and coffee. 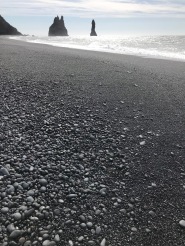 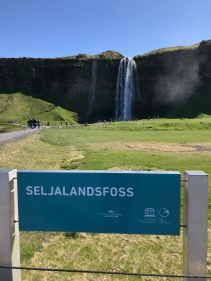 The distances in between sights takes awhile and with all the frequent stops, it takes awhile to get from place to place.  I feel like I’ve spent 3-4 hours a day in the car driving.

I made it as far as Hof, which is on the far eastern side of Iceland, near their biggest glacier. The scenery was truly amazing.  Like unbelievable.  It’s like a landscape mix of Hawaii, Alaska and Colorado and Death Valley all mixed into one.

I got lucky with the weather, sunny every day.

I captured some drone footage with my Mavic Pro.

I kept to eating pre-packaged sandwiches from the grocery stores. An ordinary hamburger is $20 bucks.  While I love Iceland, the place is outrageously expensive.  Did I mention that?

I met some guys from Australia who were traveling around Scandinavia for a month, as Aussies do.  They recommended the Faroe Islands, which they said was great, even better than Iceland.  They said it hasn’t been hit yet by tourism hordes yet …

Take a look a this picture of a farm house, with the backyard being a giant waterfall, surrounded by canyons.  That’s something to wake-up to every morning. 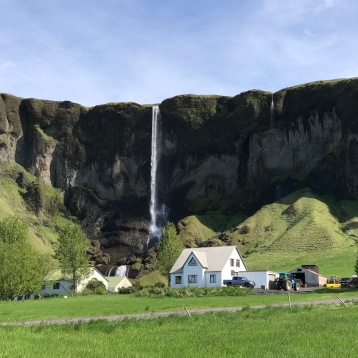 Tomorrow is the official last day.  I’ve got to pack up, prepare for early airport departure Wednesday morning.

Overall, I timed it just about right.  I did pre-buy a ticket on Wow Airlines before I came, but I don’t want to extend my car rental.  My cheap Hungarian Wizz Airline ticket is Wednesday to London.

Some travel lessons learned: you can look at a map and read all the blogs you want.  But until you get there yourself and get a feel for the place, it’s always different – we all experience travel in our own unique ways.  I thought I could do the Ring Road drive (entire island) in three-to-four days, but with all the pit stops it took me three days just to make it to the western part of Iceland.

I would have needed another 4-5 days to make a full trip, so at least a full week, anything less would have been rushed.

The blogs also didn’t mention the hoards of tourists.  Iceland is a popular destination, there are thousands of people in every area.  It’s a busy place, far more than expected. 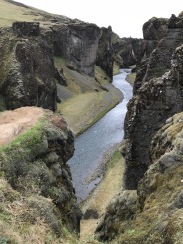 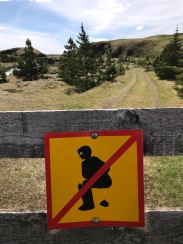 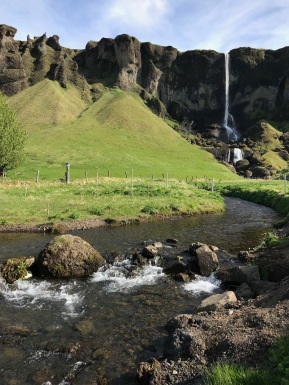 Overall, I was impressed.  The natural wonders are spectacular.  Every location is an Instagram moment.

The only downside was the cost of food.  I’m looking forward to eating some good food in London, which is where I’m headed next. 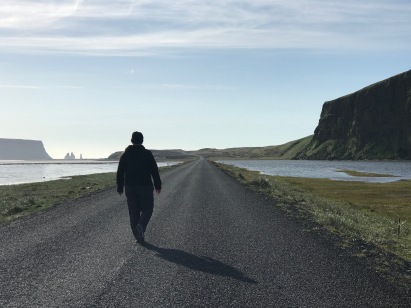 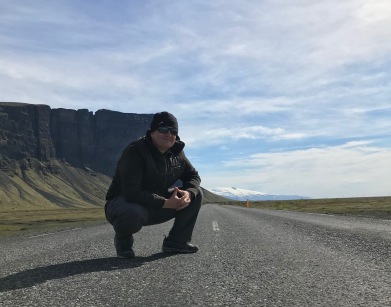 The country is far larger than it looks on the map.  Trying to do the Ring Road in a week would be pushing it and that’s a lot of driving.  With a couple days in Reykjavik, I would factor at least ten (10) full days to try and do the Ring Road without rushing it.

Unless you’re rich, prepare for food and merchandise to cost double to dollars.  It’ll make you think twice about whatever you buy and eat.  The hack is to buy as much you can eat at the two supermarket chains (Bonus and Kronan) and avoid restaurants.

Also, generally, avoid hotels and instead book stays at “guest houses” or bed-and-breakfast type places, which offer better value and are usually cheaper than hotels.  Note, some guest houses are called ‘hotels’ so it’s confusing.  In general, the guest houses were all pretty modern and offered cool experiences.  Most of the lodging is modern and comfortable and reasonable priced.

And, instead of visiting the Blue Lagoon, visit the local pool Laugaradalslaug, far cheaper, less crowded and a far more authentic local experience. 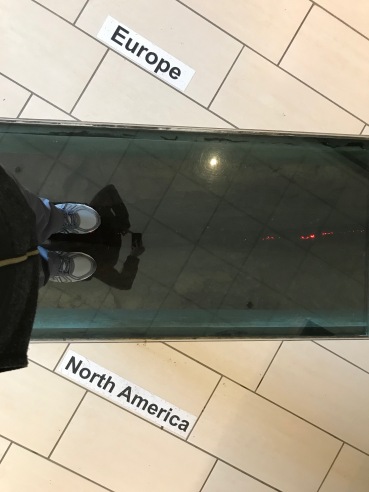 Make sure to stand on the actual dividing line between the two tectonic plates that separate Europe and North America – that’s something you can only do in Iceland.  You can also scuba dive the plates in the area called Silfra, if you don’t mind freezing water.

On the way to the airport, I would recommend visiting the Ponksafn Islands (Iceland Punk Rock Museum) and Rokksafn Islands, ostensibly the Iceland Museum of Rock N Roll.  I was like the only visitor, and had the entire place to myself.  Some great exhibits for Of Mice and Men, Bjork and, of course, Sigur Ros.

Oh, yeah, and I got a private tour of Sigur Ros‘ recording studio studio.  That was maybe the best part of my entire trip.

I’m taking the risk flying to Memphis to handle my parent’s medical concerns. Not a pleasure trip. This is what ✈️ looks like at Austin Airport - WEIRD. A 👻 town experience. 🚗 lot nearly empty. Flight less than 1/3 full. Almost all stores closed. Strange times. #pandemic #2020lockdown #austintexas #june2020
#revolutionwillnotbetelevised
👊💥♏️®️💯 #milesandluke #pedernalesfalls #lockdown2020 #escape
Pools closed nearby, so this is all we got #milesandluke #kids #summer2020
I knew that💩 would get your attention ... for my #QuarantineRememberanceofTripsPast from my 2018 solo trek to #Iceland - the most visually kick ass country I’ve ever visited. Every turn led to another epic waterfall, volcano bed, glacier. Pictures can’t capture the colors and panoramas. No entry fees anywhere! No billboards! It’s a dreamland where nature isn’t obstructed or for sale. 👊💥♏️®️💯 #WhyDoWeTravel #sigurRos #travel #betterlatethannever #journeyisthedestination #lonelyplanet #moveablefeast #noreservations #gameofthrones
Flashback to 2003 and another great trip - CUBA. Like a trip in a time machine. Thanks to @tinapatterson1035 for encouraging me to go! Bucket list of Hemingway haunts - Finca Vigia, El Floridita,La Bodeguita del Medio. Great trip with my old friend @jaigopal. One pic is me with Hemingway’s boat, The Pilar. "Drink heavily with locals whenever possible." - Anthony Bourdain 👊💥♏️®️💯 #Cuba #Havana #Hemingway #travel #betterlatethannever #journeyisthedestination #lonelyplanet #moveablefeast #noreservations #analog