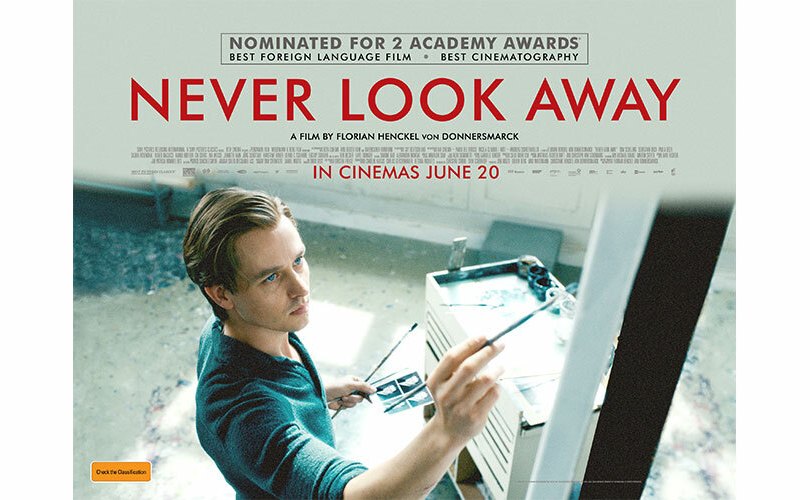 Well, director Florian Henckel von Donnersmarck may be in the lead for having one of the longest names in the history of cinema.

I can’t say I even remembered his earlier movies: The Tourist (2010) was B grade Hollywood entertainment.  I didn’t ‘get’ The Lives of Others (2006) like most everybody else, though it got critical acclaim.  I frankly didn’t think much of his work.  He hasn’t made a movie since 2010.  Many times, in those instances, the director just vanishes.

So, I was quite surprised when I randomly came upon Never Look Away by accident on Netflix. I think it’s of the greatest movies I’ve ever seen.  Most of the ‘content’ on Netflix is just a waste of my time, frankly, but there are a few gems.

One of the reasons I like certain directors is an emphasis on visuals over dialogue. I personally don’t think “words” illuminate much truth in life or art, rather it is what we see visually that is the most meaningful.

Never Look Away, which is all about art and genesis creation of it, follows this dictum in spades.  The story appears to be largely based on the life of acclaimed artist Gerhard Richter, who has disclaimed it (not that it matters — it’s still about him).  I remember seeing one of Richter’s most famous paintings (Reading) at SF Moma in San Francisco many moons ago – an incredible work – now, it’s meaning takes on other dimensions after seeing this movie.

Never Look Away spans three decades in Germany, through the horrors of Nazi Germany to the West/East German split in the 1960s.

The movie opens with a horrific scene of his sister, suffering from mental illness, beating her head with a glass bowl, blood rushing down her face, after hearing a beautiful note on piano.  It’s shocking and brutal.  She then tells him “everything that is true is beautiful.”

“I’ve seen what I’m supposed to do with my life. I see how it all fits together.”

Maybe once every couple years, I see a movie that is just mind blowing – the great ones are rare.  This is one of them.  The film deals with some brutally difficult life choices and consequences.  It’s sometimes hard to watch, but worth every minute of your time.

My personal blog about stuff.

With old friend Kevin Bryant visiting #Memphis for the first time @thelegendarysunstudio
Luke #milesandluke #saturdaymood
He finally got it! #milesandluke #kidsridingbikes
Beautiful 75F Cali weather day #endoftrip #goingbackhome
Finally, a pic of me inside a movie theater - I’ve spent much of my life inside them #1917moviesg at #cineramadome was 💯 #birthmoviesdeath
It’s a dog eat dog world #madmax movie cars at #petersonautomuseum #v8interceptor #roadwarrior #furyroad #bladerunner